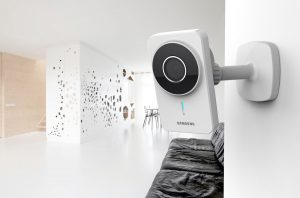 One of the most expensive and cumbersome things to install in a home was the home security system. It involved fixing cameras along with the power and wiring for each. The wiring ran from each camera to the central DVR which itself was a risk as some criminals made off with the device entirely, thereby negating its existence. Fortunately, that problem is no more, thanks to the internet of things revolution, setting up such a system is easy and does not require an expensive sum to start.

Previously these systems came as a package, several cameras, the DVR and other accessories were purchased at once. Now whenever you want to add a camera, you just buy one. There are several ways of going about this:

The first is a system similar to the systems of old. Except now the cameras are wireless and the DVR uploads video to the internet. This way the video is always available and there is no messy wiring to connect the cameras to the DVR.

Another option is to buy purely Wi-Fi cameras. There are plenty of vendors that sell them and they can be bought one at a time and do not require a DVR. The video is streamed directly to an online service. Even the alerts and notifications will be sent from the online component. Sometimes the services charge a monthly subscription to store more than a certain amount of video.

Regardless of which approach is taken, setting up a home security system is so much easier than it used to be.