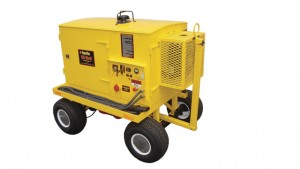 One of the most complicated, yet simple, pieces of aviation equipment is the ground power unit. It’s a relatively basic unit, but is also an integral part of the startup process for an airplane. Not only does it play an important role in supplying the necessary power that an aircraft needs, but the fact that it’s portable makes it a necessity in today’s individually-owned airports.

There is an assortment of battery packs that you can purchase either online or in-store. Portable power packs range in voltage anywhere between 24 to 28 volts – in common aviation use. In certain cases, such as with a helicopter, there will be multiple 28 volt power supplies working in tandem with each other to get this large craft in the air. This is because a helicopter requires a large amount of electricity to crank the engine. Essentially, the internal structure’s high demand for power requires there to be a large amount of electrical current.

Turbine engines vary in both size and shape. Your standard jet engine on an aircraft functions in a similar fashion to a windmill. The amount of hot gas that is produced by the fuel drive creates a sort of whirring rush that activates the turbines and proceeds to force it into a spinning motion. On the much smaller engines, you’ll find that turbine starting can be easily achieved through the process of blowing air throughout the intake. You can compare this to a hairdryer in that a volume of air moves through a combustion chamber.

The starting process of a turbine engine begins with the electric motor spinning the primary turbine shaft. Once this has been accomplished, the control gears will then force a high volume of air through the compressor and the combustion chamber. Once this steady amount of air is created, the igniter will start up the engine – which is why you hear that booming “pop” sound. This is where portable power units come into play with the aircraft. They are utilized to control a stabilized amount of voltage to the plane prior to starting up to give the dashboard and all of the on-board electronics full power. Depending on the size of the craft, the technician will either use a 24 or 28 volt battery pack to provide the necessary power. As mentioned before, there are cases where multiple battery packs are used in tandem.